Even before I knew I was pregnant I was breaking the ‘rules’ that seem to be laid out for us – I’m not actually even sure who by.

At only 11 days passed ovulation, way too early to be testing according to Google, I peed on a stick (a cheap stick from eBay too). I did it on my own, didn’t even mention it to your Daddy; and it was about 10pm, so I didn’t use that precious morning wee that anyone who’s ever done a pregnancy tests knows about. And yet, despite the rule breaking, there you were, that faint little line.

I think I took about 10 more tests over the next few days, not quite allowing myself to be 100% sure. It wasn’t until a digital test confirmed the words for me in writing that I truly let myself believe. 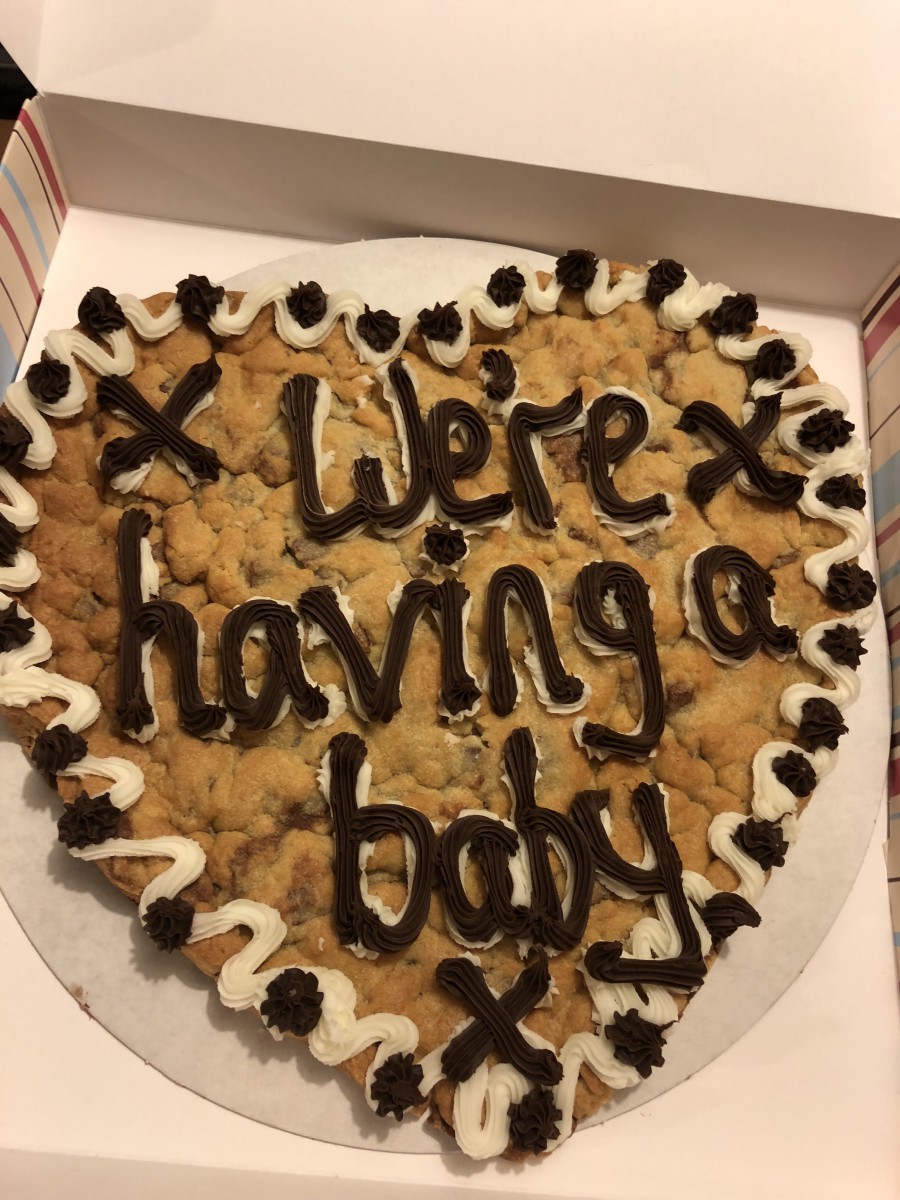 I wanted to find some special way to let Adam know he was going to be your Daddy, and what better way than with a giant cookie iced with the news. The lady in the shop smiled knowingly at me as I ordered it, and I was unable to keep the giddy smile off of my own face. When I gave it to him that night I thought he might actually throw up, the terror hit him pretty hard too, but we were both completely over the moon with the news of you.

It wasn’t long until we had both recovered from the shock, and together we quickly made so many plans for the future. We talked about your birth a lot, and about how Dilan would be such a brilliant big brother to you always. I didn’t want to wait to tell anyone, and we excitedly made plans for how to announce our news.

We told our parents and family around Christmas time, meaning I was only 6 or so weeks in, so we broke the ’12 week rule’ pretty brutally. I nervously made clear that it was early days, but truthfully I had no concerns about you not making it here okay. Waiting until 12 weeks to share this happy news, waiting until we were “out of the woods” or “out of the danger zone” made no sense to me especially after one healthy pregnancy, and I couldn’t wait to spread the news some more. 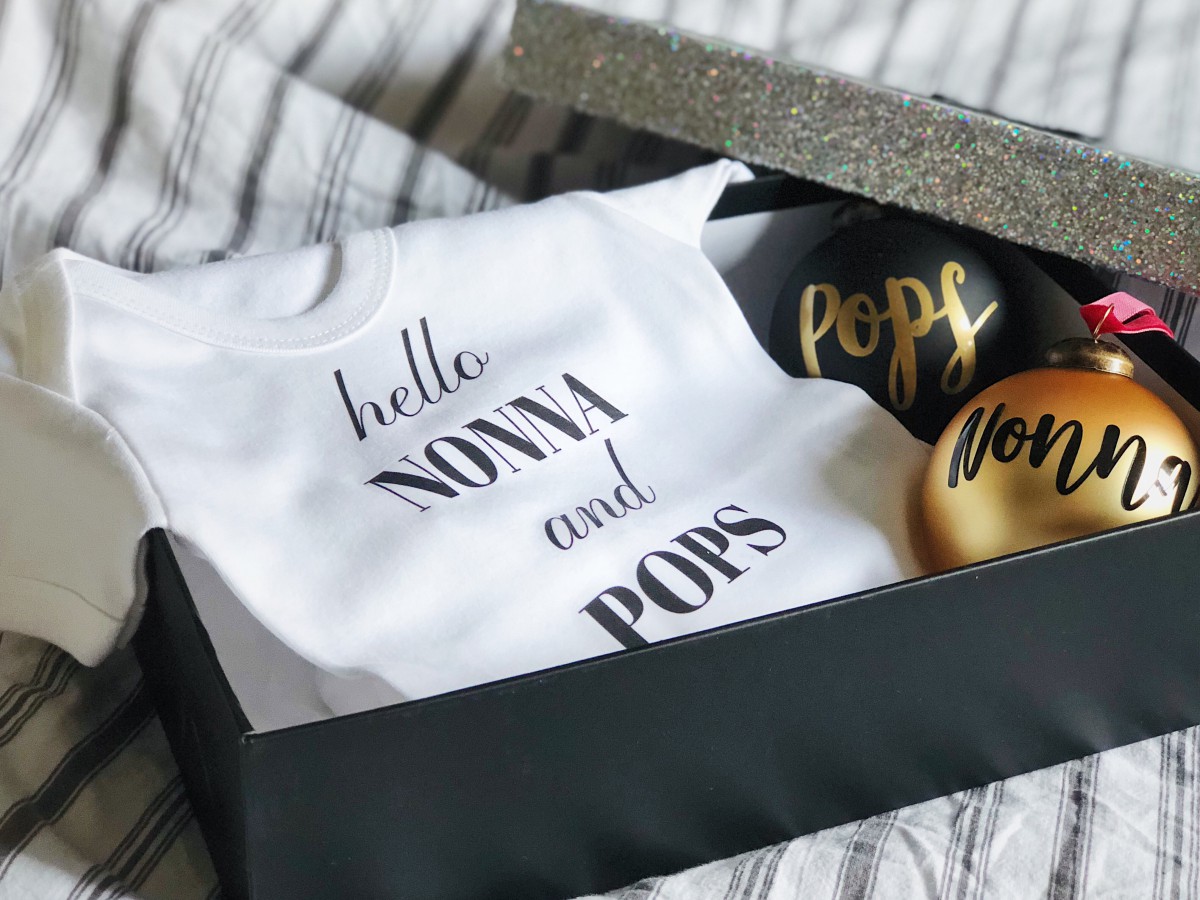 At 8 and a half weeks pregnant I dragged everyone on to the beach on a rainy afternoon to shoot an elaborate pregnancy announcement photo, inspired by my 8 weeks of scouring Pinterest. We posted the photo all over our social media feeds when I was almost 11. So close to being “safe”, but still a few weeks before our first scan, and our first glimpse of you.

In hindsight the signs had been there for a while. My pregnancy symptoms had subsided, but I had put that down to nearly finishing the first trimester. My first pregnancy was pretty straight forward and symptom free too, so I really wasn’t very concerned. My baby bump was already visible, my boobs were still sore. Even as the bleeding started I told myself that this can happen, it’s often totally normal, and it doesn’t have to mean that something bad had happened to you. But of course it did.

I went to the EAPU by myself that morning, telling everyone who offered to come that I’d be totally fine. That’s probably a rule I shouldn’t have broken, but I had no idea what was coming next. As much as I tried to prepare myself for bad news, nothing could’ve prepared me for that. For the news that your little heart wasn’t beating, that it hadn’t been for quite some time. That the weeks I had spent speaking to you and loving you, checking that stupid app to see what size fruit you were today, they were all a lie. That my whole body betrayed me by carrying on with the pregnancy, totally unwilling to admit that you were never to be.

I felt a huge amount of things that day, and I still feel most of them now. Shock. Sadness. Confusion. Anger. Something I felt then that I don’t feel now though is embarrassment. For a while after I asked myself how I could’ve been so stupid. Why I had thought announcing before I was “out of the woods” was a good idea. What on Earth I was going to do now that everyone knew about you, and I had to tell them all that you were gone. That actually you were gone before we had even told anyone at all. 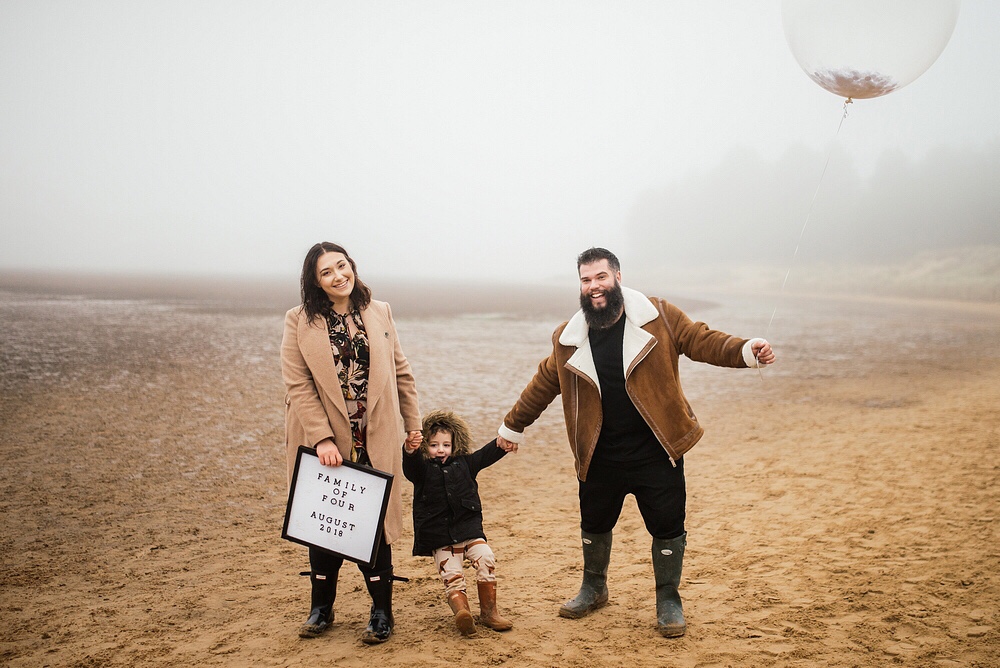 I stopped feeling embarrassed the minute I went public with our awful news. I stopped blaming myself for breaking this ridiculous 12 week rule right then and there. Because within minutes I received a million messages, from mothers who had been there themselves. Each one was another mother telling me her miscarriage story, sharing her pain with me and sharing in mine. Message after message was full of heartbreak and of understanding, because these women also knew what it was like to lose someone you’ve never even held. They knew how it felt to have a whole future of hopes and dreams ripped from you, replaced with nothing but doubt, pain and misery. They knew, but so many of them had never shared that with anyone before.

Since that day I have spoken more about my miscarriage, mainly as a way to help myself cope with the loss of you. Some people have messaged me telling me that I’m strong, but all I feel is weak. Some people have messaged to say I’m being brave, but truthfully I feel like a bit of a coward. The truth is I’m not brave, I’m selfish. Selfish for taking comfort in another mother’s pain. I’m not strong, I’m weak. Too weak to sit with all these feelings swimming around in my head. Instead I pour them all on to paper, then file them neatly away.

Something I do feel though is pride. Proud that I have been able to share our story, proud that hopefully maybe just for today, somebody somewhere feels like miscarriage is not an unspoken taboo. That someone manages to reach out and tell their own story in the same way that I’ve shared mine, and provide a small amount of comfort to someone else who’s in need.

I understand the ’12 week rule’, and I appreciate why couples choose to wait. But I am no longer questioning my decision to announce ‘early’. My pregnancy was short, but it deserved to be celebrated. The minute you see those positive lines you start imagining a new life. You give that new life hopes, dreams, love and good wishes. You imagine every part of it, from the minute they are born to the day that they leave home, and every day in between. Born or not, that little life was a part of mine already. It was promised to us and then it was so cruelly taken away. That little life begins in your heart from the moment you take that test, and deserves celebration no matter how long or short it turns out to be. 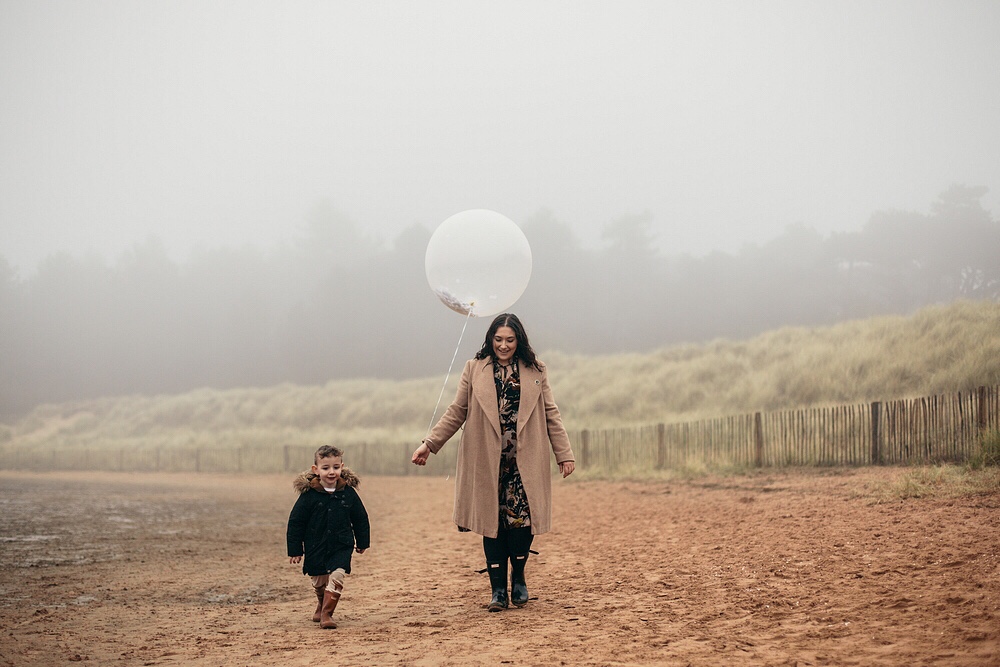 My hopes and my dreams for you mattered, the life we imagined for you deserved to be known, and I’m glad that we announced you to the world in the way we did. I’m glad we celebrated you. I’m glad we shared our excitement and our joy because of your existence. Yes, it now means that we share our pain and sadness, but there is some comfort from that too. Sharing our news ‘early’ has meant we can’t try to suffer in silence, and we don’t have to feel our grief completely alone. Our sadness and the loss of your little life is something we can share too.

Announcing my miscarriage was an awful experience, but the love, support and kindness that has followed has taught me many things. If we are lucky enough to try this again I won’t wait to share the happy news, because that life will deserve to be recognised and celebrated too.

Whether you opt to share your news at 2 weeks, 12 weeks or 42 weeks pregnant; you deserve to be supported and celebrated through that pregnancy. If the worst was to happen you have every right to grieve and to cry, regardless of how many weeks gone you were. Publicly or privately you deserve to acknowledge those feelings of pain and despair in whichever way would help you best. If you need to reach out to others for support, or to get loud and angry about how unfair the whole thing really is, you should do that with no hesitation at all.

Breaking the rules has allowed me to experience my pain in a way that I’ve found healing, and it seems that others have benefited from the sharing of our story too. At least 1 in 4 pregnancies end in miscarriage, and that means that it’s very likely that either you or someone you know well has or will suffer from this type of heartbreaking loss.

Acknowledge that pain, share it with others if you feel like you can. Above all please know that miscarriage is something we need to discuss more, that it’s not something you have to stay quiet about or keep hush hush. Sharing your pain won’t make it hurt any less, but discovering that, however you feel, it’s very unlikely that you’re alone does make a difference. Discovering that there are people who have felt these feelings and have survived, that’s got to give you some strength to carry on.