Today I’m talking about periods. If that doesn’t interest you why not head over to check out this cookie recipe instead, because this post might not be for you.

Periods for me have always been a major pain, quite literally. I spent my high school years missing school each month because the pain was so bad I could hardly stand up. I bled so heavily that I would wear two nighttime pads and still end up leaking through my clothes before second lesson. At 15 I was given the birth control pill to try and make them more bearable. They were messy, they were an inconvenience, they were something to dread.

After my first unsuccessful attempt at using a tampon I remember waking up on the bathroom floor in a cold sweat. They weren’t for me. Even after having a baby I was pretty reluctant to give them another try, the idea kind of freaked me out. Instead I spent 12 whole years using disposable sanitary pads. Disposable pads which are expensive, drying, uncomfortable and also they smell a little funny. They are a pain because if you haven’t got a bin next to the toilet you are using then you’re screwed, and they are terrible for the environment. Every time your boyfriend grabs your bum you’ll worry he’ll feel your nappy, and god help you if you get the sticky bit stuck where it shouldn’t be. A friend of mine once tried to flush hers down the toilet, that wasn’t pretty.

Eventually, not very long ago really, I convinced myself that after pushing a baby out of my vagina I probably could manage to get a tampon up there. With a little advice from a friend I lubed one up with a bit of coconut oil and got it in. At first I felt liberated. I didn’t have to worry about anyone seeing/feeling the giant pad in my knickers, I didn’t need to check for a bin before I went in to a toilet. After pregnancy my periods had become much lighter and more manageable, and using tampons meant no leaks or mess to worry about. 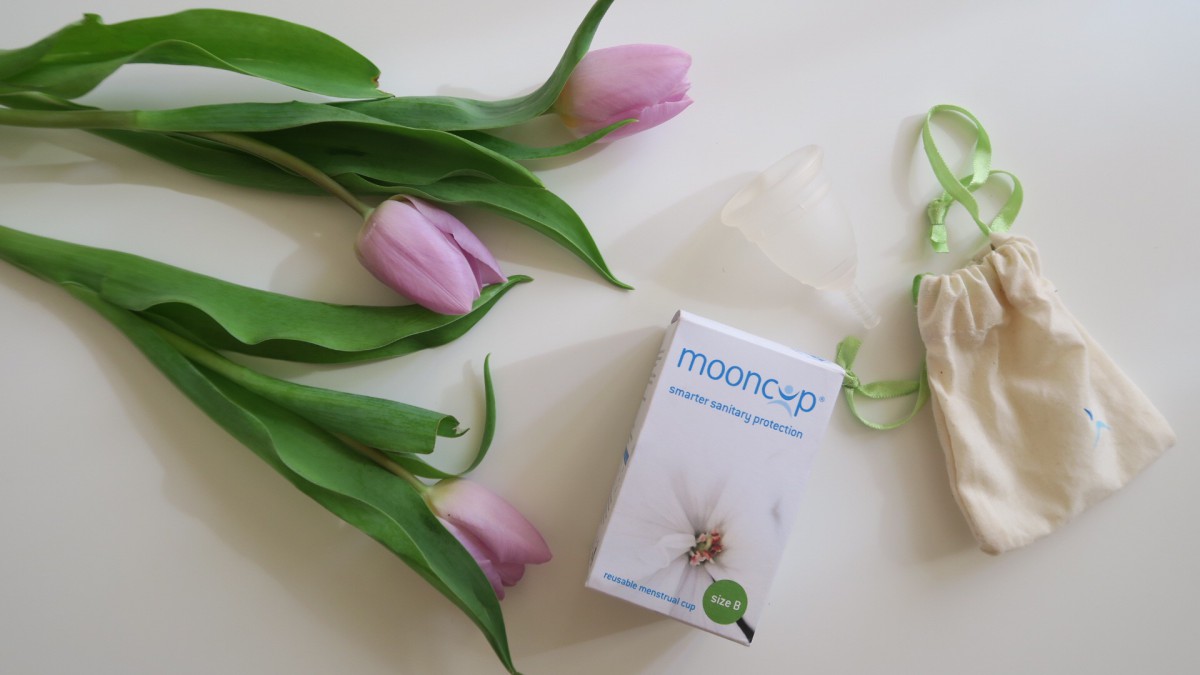 After a few months though I began to wonder how great they were. On my lighter days tampons were painful to remove and felt so dry while in use. On heavier days I’d get that awful feeling like they were about to fall out. I was buying natural tampons which are free from chemicals and dyes but I was still a little concerned about what I was putting into my body, and at £1.99 for 16 a little put off by the price.

As someone who quite enjoys being a little bit of a ‘hippy’ or ‘alternative’ I took myself off to a few natural groups on Facebook and discovered I wasn’t alone in disliking tampons.

The reason they feel drying is because they are designed to absorb moisture. This obviously includes blood, but it also includes the natural moisture and lubricants usually found up there. Tampons can also end up leaving fibres behind once you’ve removed them which is a little gross, especially when you consider that up to 5 out of every 11 disposable sanitary products contains traces of chemicals and insecticides. And most disposable sanitary products end up either in landfill if thrown away, or washed up on our beaches if flushed. In just one day nearly 28,000 used tampons and applicators were collected on beaches worldwide.*

I quickly found that the most recommended alternatives were CSP (cloth sanitary protection – reusable pads) and menstrual cups. Because I was still really enjoying being nappy free thanks to my new found freedom from sanitary pads I opted for a cup. Earthwise Girls has some great resources for choosing a menstrual cup and I decided to go for a Mooncup in size B. Usually if you are over 30 or you’ve given birth vaginally they recommend size A but as I was still relatively new to using tampons and my periods are now very light I opted for the smaller one and it’s been fine for me. 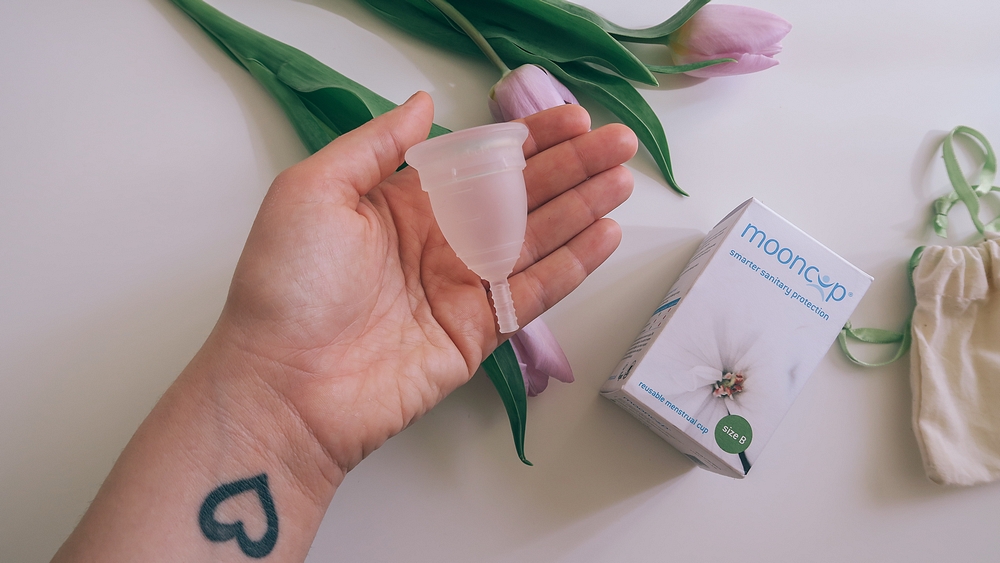 Using my mooncup for the first time

I was really nervous about using my mooncup for the first time, and I left it sitting in the cupboard for a few periods before summoning up the courage to try it. I studied the diagrams carefully, practiced the different folds and perfected my squat.

My main tactic was to fold it as small as I possibly could so I went for the C fold. The cup comes with a really helpful leaflet and the Mooncup website has loads more advice if you do struggle. I was pleasantly surprised by how easy it was to get it in, and how comfortable it immediately felt. My real anxiety was about how the hell I was going to get it out.

I posted in a brilliant Facebook group about my worries and the advice was unanimous – number one rule is do not panic. If you can’t get it out then relax, take a break, have a cup of tea and come try again in a bit. It can’t go any where or get lost so it will come out, and becoming stressed is the worst thing you can do as it will cause your muscles to tighten.

They were right of course, when it came time to remove the cup I relaxed, bared down slightly like you would in labour, pinched the bottom to release the seal and slid the cup out – no problem at all.

I’ve just finished my second cycle using the cup and I’m much more confident about getting it in and out, although I still do an awkward little squat to help get it in. I’ve also been able to trim the stem a little which you may have to do depending on the height of your cervix, but don’t do it until you’re confident removing your cup without it.

What I love about my Mooncup

Natural, environmentally friendly products are important to me, but I’m a little lazy and a little stingy, so here’s what really convinced me to give a menstrual cup a go – 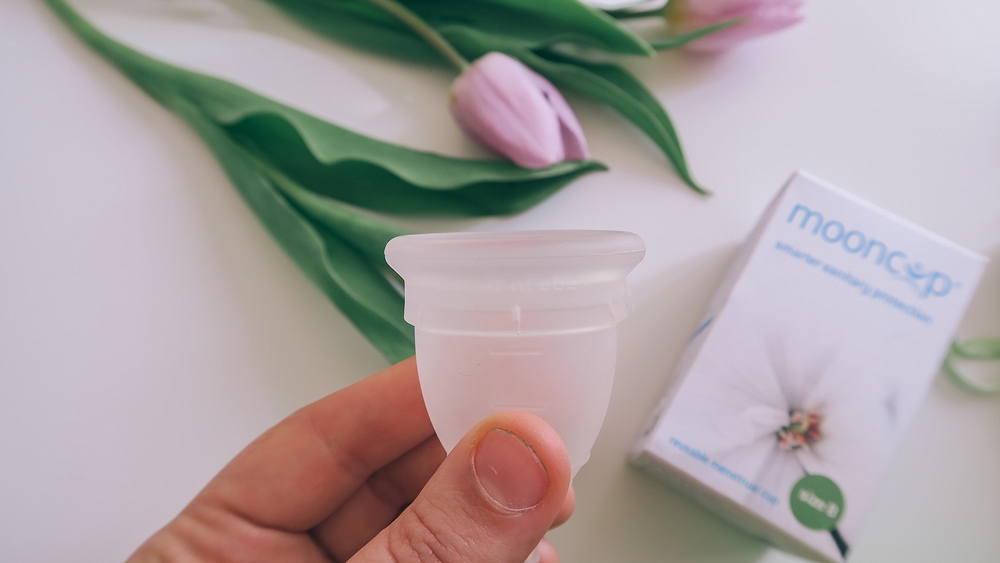 Like anything, there are drawbacks to using a menstrual cup so here are a few drawbacks I have found so far:

I realise this sounds a little dramatic but I truly feel that menstrual cups are a little bit life changing. Yes, it may take a while to get the hang of, or readjust to a new way of doing things, but the benefits far outweigh the drawbacks. Since using my Mooncup I’ve felt much more positive about my period, and I look forward to enjoying more of the benefits of reusable sanitary protection.

Tempted? Get your Mooncup now and give it a try for yourself.

Have I convinced you to give it a try? Are you curious about CSP or menstrual cups, or is it something you’ve never thought of before? Let me know in the comments!

*statistics from Mooncup. This post contains affiliate links. I’ve received no money for this post, I bought my Mooncup myself and all thoughts and opinions are my own.